Can the European economy survive another cold winter?(Global hot spots) 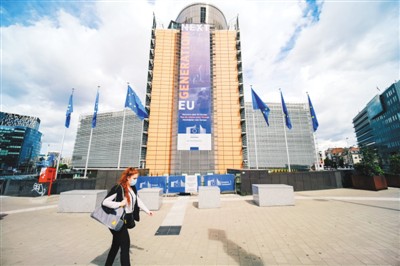 The picture shows a woman wearing a mask walking by the European Commission headquarters in Brussels, Belgium.
Photo by reporter Zhang Cheng

The Spanish government recently announced the extension of the state of emergency until May next year; Italy issued a new order,A curfew will be imposed across the country; England will implement the second full “blockade” from the early morning of November 5; Germany and France have announced on October 28 that they will implement a nationwide “cities lockdown”.

October 30,Preliminary data released by Eurostat showed thatSeasonally adjusted,In the third quarter of this year, the GDP of the European Union and the Eurozone increased by 12.1% and 12.7%,Both are the largest increases since the start of the statistics in 1995.

but,The news did not usher in much cheers.On the 30th,None of the major European financial markets responded positively to this.current,What European countries are facing is another distressing situation-the new crown pneumonia epidemic is fighting back fiercely.

Michael Ryan, Executive Director of the World Health Organization’s Health Emergencies Project, said recently,October 19-25,About 46% of confirmed cases of new coronary pneumonia and 1/3 of deaths in the world are from Europe.Europe is at the epicenter of the epidemic.In addition,The epidemic curve released by the WHO shows thatThe number of new cases in a single day in many European countries is higher than at the peak of the first wave of the epidemic this year.The death toll is also increasing.

In late October,As the second wave of the epidemic spread rapidly,The British “Financial Times” once reported thatEuropean leaders want to avoid strict blockades,Because the previous move caused a record recession in the European economy since World War II.however,Today,The shocking number of new cases has left European governments with no choice.

Since November,Many European countries have gradually increased their epidemic prevention measures.Currently,More than ten European countries, including Germany, France, and the United Kingdom, have issued blockade bans.The duration is mostly about one month.Large-scale events have been cancelled, curfews have been extended, entertainment venues have been suspended, and people have to stay at home for no reason.At the end of the European consumer season, this is the end of the year.Suddenly because of the epidemic, the “pause button” was pressed again for economic and social activities,This makes the prospects for European economic recovery worse.

The German Federal Minister of Economy and Energy Peter Altmeier recently stated thatEurope is now at a crossroads.If the number of new coronary pneumonia infections cannot be significantly reduced,The economy will not be able to sustainably recover.

The Financial Times quoted economists as saying thatThe second wave of epidemic speed exceeded expectations,The increase in the number of COVID-19 infections and the government’s re-restrictions on the movement of people may suddenly interrupt the recent recovery.Caused the European economy to bottom out again.In fact,Even if European countries do not adopt comprehensive blockade measures,The epidemic will still severely hit consumption,Leading to an increase in preventive savings,Most European countries’ GDP growth in the fourth quarter is likely to enter a negative range again.

”The impact of the new crown pneumonia epidemic on the euro zone economy,Regardless of strength or scope,Both are far ahead of the 2008 financial crisis and the 2009 European debt crisis.Unlike the previous two crises,In order to contain the epidemic,European countries must implement social distancing measures,Commercial activities were forced to stop,The service industry, which accounts for a large proportion of the national economy of European countries, has been hit hard.”Associate Professor Zhao Ke of the International Strategic Research Institute of the Central Party School of the Communist Party of China said in an analysis by our reporter,The current rebound of the epidemic in Europe will increase the risk of a European economic downturn.The recovery momentum was suppressed.

Reuters quoted a survey result on the 4th saying,As the second wave of the epidemic hit and various measures taken to control the epidemic severely hit the service industry,The economic recovery in the Eurozone stalled in October.

As the locomotive of the euro zone economy,Germany has felt the violent impact of the second wave of the epidemic.According to the latest data released by the German Iver Institute for Economic Research at the end of October,After seasonal adjustment,Germany’s October business climate index increased from 93 in September.2 points dropped to 92.7 o’clock,The first month-on-month decline occurred after five consecutive months of rising.This index is considered to be the vane of German economic development.It has important reference value for observing the German economic situation.

”The rebound of the epidemic and the second’blockade’ of many European countries have led to weakening of economic activities.Trade, catering, and tourism are all deeply affected.In addition,The UK’s “Brexit” trade negotiations have never been able to make breakthrough progress.The possibility of Britain’s “no-deal Brexit” still exists,This also adds more uncertainty to the prospects of European economic recovery.”Yan Jin, executive director of the Center for European Studies at Renmin University of China, analyzed this reporter.

recently,The finance ministers of the 19 member states of the Eurozone held an online meeting,Discuss together how to deal with the impact of the epidemic.The statement released after the meeting stated thatThe recent accelerated spread of the new coronavirus and new containment measures have increased uncertainty.May affect economic recovery.but,Europe has made better preparations for the second wave of epidemics,Can withstand the economic consequences of the second wave of the epidemic.

”Next,What specific measures will the finance ministers of the euro zone take to deal with the economic impact of the rebound of the epidemic?This also needs to be observed.The second wave of the epidemic will not cause a complete shutdown of Eurozone member states.But under the background that the debt ratio of the government and enterprises is already high,The fiscal policy space of Eurozone member states is relatively limited.”Yan Jin said.

”Compared with the 2008 financial crisis and the 2009 European debt crisis,The European Central Bank and European governments responded to the impact of the epidemic this time,The shot is quicker, decisive, and powerful.First of all,The European Union established a 750 billion Euro European Recovery Fund,The first bond issuance to the market in the name of the EU,And a considerable part of the financing will be allocated to relevant member states through gratuitous fiscal transfer payments.In addition,The European Central Bank responded promptly,And have prepared ‘ammunition’,Ready to expand the asset purchase plan at any time,Deal with the greater impact of the rebound of the epidemic.Simultaneously,European countries’ social safety nets have been consolidated and strengthened with financial support,The residents’ spending power has not suffered much damage,This laid the foundation for the next economic recovery.”Zhao Ke analyzed that,The recession of the European economy is visible,But it is relatively controllable,Because the EU and European countries are relatively adequate in policy preparation as a whole.

British Prime Minister Johnson recently announced thatThe paid vacation plan was extended to November.The plan provides subsidies equivalent to 80% of wages for private sector employees forced to take leave due to the epidemic.British media said,The British move followed in the footsteps of Spain, France, Italy and other European countries.In Germany, the birthplace of this model,Policymakers extended the subsidy program until the end of 2021.

”With it (the paid vacation plan),We can keep employment,Provide protection for enterprises to make plans.Companies need skilled workers to return to work,Only in this way can we start again after the crisis,Promote economic operation.The “Voice of Deutsche Welle” radio quoted the German Minister of Labor Hubertus Haier as saying.

”Next,Eurozone member states will also strengthen coordination and cooperation,Promote the implementation of funds from the European Recovery Fund under the existing framework.”Yan Jin thinks,As the epidemic situation slows down,The research and development of the new crown pneumonia vaccine is advancedThe response measures of the EU and European countries are gradually implemented and show results,The European economy will gradually recover,Out of the woods.”It’s just that the process may be slower.”